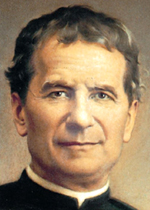 John Bosco was born on 16th August 1815, in a peasant Family at Becchi, near the city of Turin, Italy. He was only two years old when his father, Francis Bosco passed away.

At the age of nine, he had a dream. He saw himself in a vast field, surrounded by youngsters, laughing, singing and playing. Before long the boys began to shout and a curse, a  fight broke out among them. John tried to restore order by swinging his fists around and shouting at the trouble makers. A mysterious person stopped him saying, “Not with blows, but with gentleness and kindness you shall win them over.”

John recognized in this dream of his future mission. This experience deepened his desire to become a priest and dedicate his life for the welfare of young people.

John’s path, however, was full of hurdles. His mother Margaret though poor, was prepared to make any sacrifice to educate him. But his elder step-brother strongly opposed his going to school. He had to do his share of work on the family farm and study during his spare time. To earn the little extra money needed for his books, he offered himself to work as a labour, shepherd, tailor, shoe-maker, and cook-skills which he later taught his orphans.

As a teenager, John used to gather boys of his age and entertain them with music, Jugglery, and acrobatics. His performance, however always ended with a good story and a brief exhortation to live a good and honest life. In due course, John entered the seminary and was ordained as a priest on 5th June 1841. From then on He was affectionately known as Don Bosco(Father Bosco).

Thanks the requirement is fulfilled.